DWELLSPACE: POSTHUMAN BUDDHISM AND THE DIGITAL SELF 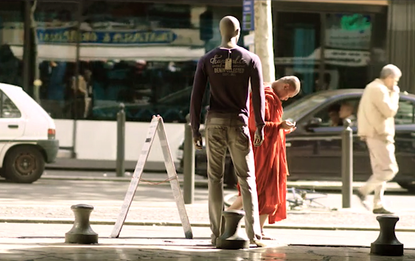 Preface: In Search of Spaciousness

Dwellspace: Posthuman Buddhism and the Digital Self explores ideas that have their root in a number of different disciplinary domains but share common ground insofar as they variously confront questions of selfhood and embodiment in the digital age. The book approaches these questions by framing its discussion around philosophical and anthropological perspectives that span two very different fields of study. Firstly, addressing debates in media and communication studies that explore phenomenological and non-media-centric approaches to digital media practices, Dwellspace provides insights into the embodied materialities of posthuman media cultures, where digital communications serve as much an ontological as instrumental function (provoking the question ‘what does it mean to be “posthuman” in the digital media age?’). Secondly, grappling with some of the spatial and temporal implications of posthuman media materialities, Dwellspace draws on ideas that speak to, and are illuminated by, strands of Buddhist thought and practice (provoking the question ‘what does it mean to be “mindful” in the digital media age?’). In this vein, the book examines topics that include the use of digital devices and mindfulness apps as tools to aid meditation practice; the rhythmanalytical affects of ‘slow media’ on embodied understandings of time; and the production and consumption of mediated ‘spaciousness’ and its impacts on everyday phenomenologies of the self.

The motivation for writing the book stems from a desire to explore more fully a number of interrelated themes, some of which have started to feed into content covered on a course I teach at the University of Liverpool called Media, Self and Society. The introductory lecture on the course was written in the days following the death of David Bowie in January 2016. Responding to that event, the lecture sought to examine concepts of the ‘postmodern self’ by reflecting, in part, on the shape-shifting and fluid identities that were a hallmark of Bowie’s cultural persona. It did so by bringing the idea of creative changefulness, exemplified by Bowie, into dialogue with Buddhist notions of impermanence and non-self (and by examining Bowie’s own long-standing interest in Buddhism). Taking its bearings from these initial ideas, Dwellspace has developed around key thematic objectives that are centred on the interplay between digital technology and everyday understandings and experiences of body and self. By explicitly framing this discussion around Buddhism and Buddhist practices, the aim of the book is, on the one hand, to examine more closely the interlacing of Buddhism and digital media (and related discussions on mindfulness), and, on the other, to explore the ways in which Buddhist concepts such as non-self can be usefully deployed as part of broader theoretical engagements with questions of selfhood and embodiment in the digital media age.