Poetry writing is something I have dabbled with on and off over the years. The motivations that have driven this are varied, and while these have not always been immediately discernable, the process has invariably been one I have valued and sought to channel towards other tasks at hand. One such example of this is where poetry writing - that is, the process itself rather than necessarily the delivery of a finished output (a poem) - has informed the production of ideas and research directions that have in turn led to the development of forms of academic writing (research outputs). This has not been a deliberate strategy, it is more accurate to say that where this has occured to date it has been by way of reflection after the event that the practice of poetry writing is recognised as having functioned as a form of method. This recognition has been something I have stumbled into and around but not yet sought to get a firmer handle on (if for no other reason than it hadn't occured to me that there was anything that I needed to get a firmer handle on - poetry writing is one thing, academic writing another, so why would there be reason to think that they might in any way be connected?) 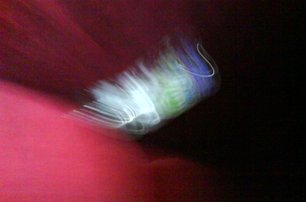 My wishing to take further steps in this direction are, therefore, simply a means by which I am able to, yes, get a firmer handle on the creative mobilisation of ideas that begin, are incubated within, and are finally hatched from a poetics of practice. But also, and more importantly, to open up a space in which to critically reflect on the value of harnessing other forms of knowledge, or rather, of harnessing a critical sensibility whereby knowledge garnered through the rational and discursive precision of intellectual frameworks can be held in abeyance so as to make room for the fuzzy and impressionistic poetics of not knowing, in the instrumental sense at least. Where that more embodied, sensory, and dream-dredged poetics of not/knowing might take us is anybody's guess. But that is kind of the point.

Below are outlines of two recent academic articles that started out as a poem. When the respective poems (Lache Eyes and #48) were being written there was no awareness or intention that they would go on to furnish inspiration, ideas and material for what would become research outputs. Drawing and reflecting on these and other examples, and engaging with the rich and growing body of literature that, from different backgrounds and vantage points, explores the poetics of method and the possibilities of poetics as method, I am interested in further developing insights into what I am referring to as poetic-inductive methods, focused in particular around phenomenological approaches to space and place.

Finally, why poetic-inductive 'movements'? I originally headed this page with 'poetic-inductive methods', but movements strikes me as more appropropriate as it is less tainted by the assumed rigour, prescription or formalism that all too often accompanies discussion of method. I am very much guided here by philosopher Gaston Bachelard's work on the material imagination as explored in Air and Dreams: An Essay on the Imagination of Movement. Commenting on the poems of Percy Shelley, Bachelard writes:

...poetry is a space - a vertically dynamized space which expands and invigorates everyone and everything in the direction of height. No one can enter it without becoming part of an upward movement, an ascension... poetic forms are a deposit left by imaginary motion. (1988 [1943]: 45, 59)

The title of this chapter has been adapted from René Daumal’s unfinished pataphysical novel, published posthumously in 1952, Mount Analogue: A Tale of Non-Euclidean and Symbolically Authentic Mountaineering Adventures. Conceived in and reflecting on the period of lockdown imposed by the UK Government from March 2020 in response to the COVID-19 global pandemic, the chapter is in part an exercise in deep mapping and spatial anthropology (Roberts 2015-16, 2018), but it is also an attempt to both delineate and dissolve the parameters of a hyper-localised and, ultimately, existential space of territory conditioned by an experience of lockdown. In terms of the former, attention is focused on a small patch of land that is located in a patchwork of fields adjacent to the street where the author lives. Going by the name ‘Lache Eyes’, the area is reclaimed marshland located on the English side of the England-Wales border in the town of Saltney in Flintshire, North Wales. The name ‘Lache’ is derived from an Old English word meaning pond, pool, or swamp, and hence alludes to its former topographic status. Restricted to taking outdoor exercise within the immediate environs of the author’s home, during lockdown this liminal territory became an immersive space into which a meshwork of historical, familial, psychogeographical, and critical-creative entanglements have inchoately fed. Where spatial anthropology tips over into more existential ruminations into Ballardian ‘inner space' (and where it dovetails with pataphysics) is in the enforced (legally, morally, experientially) adjustment to the recalibrated nature of ‘home’ under lockdown. In this regard, J.G. Ballard’s short story ‘The Enormous Space’ (adapted for television by the BBC in 2003 and renamed ‘Home’) serves as a catalyst for the re-imaginings of territory, where attention to the liminalities, intimacies and interiority of spatial proximity enables the charting of frontiers that stretch beyond the affective geometries of everyday living.

In the introduction to The Poetics of Space, Gaston Bachelard describes a phenomenological encounter with an image in terms of a reverberation and sonority of being. Warming to his theme, the philosopher goes on to suggest that ‘[t]he image, in its simplicity, has no need of scholarship’ (1994: xvi, xix). My first encounter with artist Cindy Sherman’s Untitled Film Still #48, at an exhibition at the National Portrait Gallery in London in 2019, was similarly reverberant insofar as it elicited a response that was visceral, immediate and, despite the relative smallness of the print being exhibited, extraordinarily spacious in terms of the lifeworld the photograph was able to invoke. The image depicts a young woman, her back to the camera, standing at the side of a road with a suitcase positioned behind her looking out to a natural landscape. Taking this photograph as the central focus of enquiry, this chapter explores a phenomenology of an iconic travel image that proceeds by seeking to ‘bracket out’, initially at least, scholarly reflection on the meaning, aesthetics and critical reception of the image itself. In this respect, the chapter’s aim is to comb through some ‘poetic-inductive’ impressions in the hope of discovering insights that speaks to the reverberation I experienced in the gallery space; a ‘poetic[s that] speaks on the threshold of being’, as Bachelard puts it (ibid). Drawing on the work of Barthes, Sartre, Merleau-Ponty and others, the chapter delineates and traces a poetics of encounter that was, in the first instance, mapped in the form of an actual poem and from which, in turn, I navigate a more resolute scholarly path towards an understanding of the phenomenology of the travel image.