Fake News (a version of Rumi)

A voice in the air says

Better be quarry than hunter.

Don't try to be the sun. Be a dust mote.

Put your shoes on upside down.

Fatburg in the white house

stripping the carcus where others merely nibble

the better to bludgeon

what others strive to taste.

quarried in the everyday heat of the sun.

Things are reversed from what they should be in this place you live now.

One who should be hung on the scaffold is made emperor.

Wax emperor in his wax tower

gold had never been so tarnished

yet the crowds stand and clap.

Buried deep within his ornamental tomb

the wax leaves wilt and the wax fruit rots 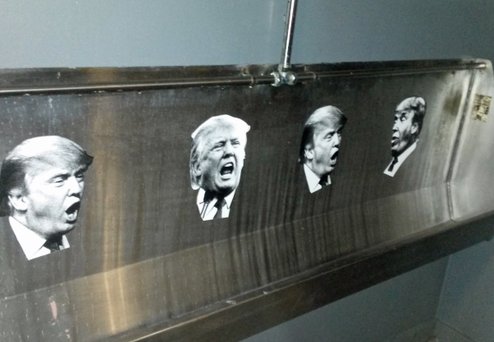 Men's toilets at The District, Jordan Street, Liverpool, 18 May 2017